In the United States, companies are engaging in climate action as a result of different domestic business drivers: Investing in renewables, innovating to create climate-compatible products, and attracting new talent through environmental values are most often driven by local or regional imperatives.

But for most companies operating within global value chains, the pull and push of climate action also comes from abroad, and many U.S. companies now understand the potential to demonstrate global leadership through climate action.

The pull factor: Multinational corporations are engaging their suppliers on climate like never before.

Addressing supply chain climate impacts is a necessary step for companies with ambitious climate strategies and commitments. That’s because, compared with direct emissions in a company’s own operations, the average ratio of indirect emissions in the supply chain is 4 to 1. Despite this, the scale of such action is challenging: Only 34 percent of suppliers who report to the CDP supply chain report are able to decrease their operational emissions every year. A further 36 percent of suppliers say they have insufficient data to track progress.

U.S. companies aspiring to become climate leaders in the global economy have an opportunity to improve their suppliers’ action, pulling more companies along on the path toward a thriving, clean economy.

Walmart—which has set ambitious science-based targets to reduce its absolute emissions by 18 percent by 2025 from 2015 levels—represents an example of this potential. The company is working with suppliers to reduce greenhouse gas emissions from the manufacture and use of products by 1 billion tons between 2015 and 2030. That’s equivalent to the emissions of 291 coal-fired power plants for one year.

While many of Walmart’s global suppliers—including Dell, Diageo, General Mills, Kellogg, and Sony—already have science-based targets, many of them do not. Through its commitment, Walmart will engage in supplier development and collaboration on sustainability programs, and the company may consider working with competitors and stakeholders to set industry standards. The company is driven to transform product offerings and business models to engineer out downstream climate impacts while saving costs. By the end of 2017, Walmart aims to engage more than 500 manufacturers in China in a factory-based energy-efficiency program.

With stores in 15 countries outside of the United States and 228 distribution centers that support its overseas operations, restaurants, and food-processing facilities, Walmart’s climate ambition is not only a matter of what it can achieve for its own operations at the local level. It is also an avenue to demonstrate U.S. leadership with partners all over the world.

General Mills also set ambitious science-based targets to reduce absolute emissions by 28 percent across its entire value chain by 2025, with a focus on purchased goods and services (dairy, row crops, and packaging) and delivery and distribution. The company also plans to help its growers and other suppliers adapt to climate change impacts. Because of this ambition, General Mills is recognized as a leader on climate action in its industry and globally. 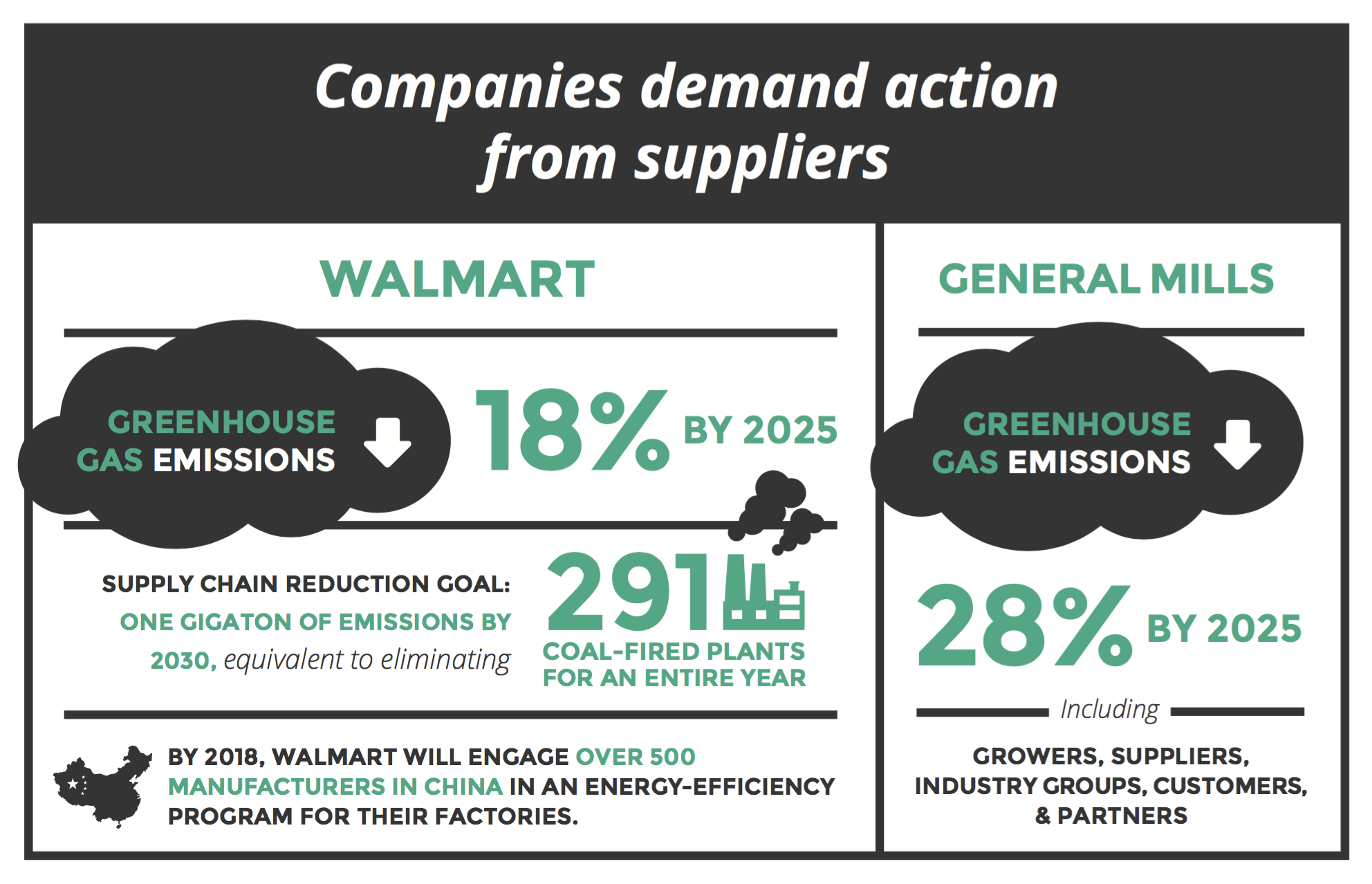 The push factor: China is emerging as a new climate leader, pressuring more U.S. companies to meet its standards.

Today, China is rivaling U.S. leadership on climate action. China is now the biggest investor in renewable energy, investing US$102.9 billion in 2015, which is more than twice the investments made by any other country—including the United States, which invested US$44.1 billion that same year.

In January, China announced it would invest US$361 billion in renewable power by 2020. This growth has many benefits for China, including the creation of 3.5 million jobs in renewable energy. The government expects renewables employment to reach 13 million by 2020—the equivalent of adding more than 5,000 new jobs a day. Between 2012 and 2015, China added 1.8 million jobs in renewables, compared with only 157,000 in the United States. In addition to taking the lead in jobs, Chinese companies dominate the global renewable energy market: The world’s largest wind energy company and five of the top six solar firms are Chinese. Importantly, China has reiterated its commitment to the Paris Agreement, which has helped position the country as the new global leader on climate.

This climate activity is likely to push U.S. companies toward more ambitious action. The license for doing business in China may soon include strong environmental performance and ambitious climate action. American companies will have the choice either to align with China’s new climate leadership or, better yet, surpass it. If American companies don’t align, the United States may lose its current position as the climate leader operating through global value chains. This could, in turn, weaken key aspects of U.S. competitiveness. 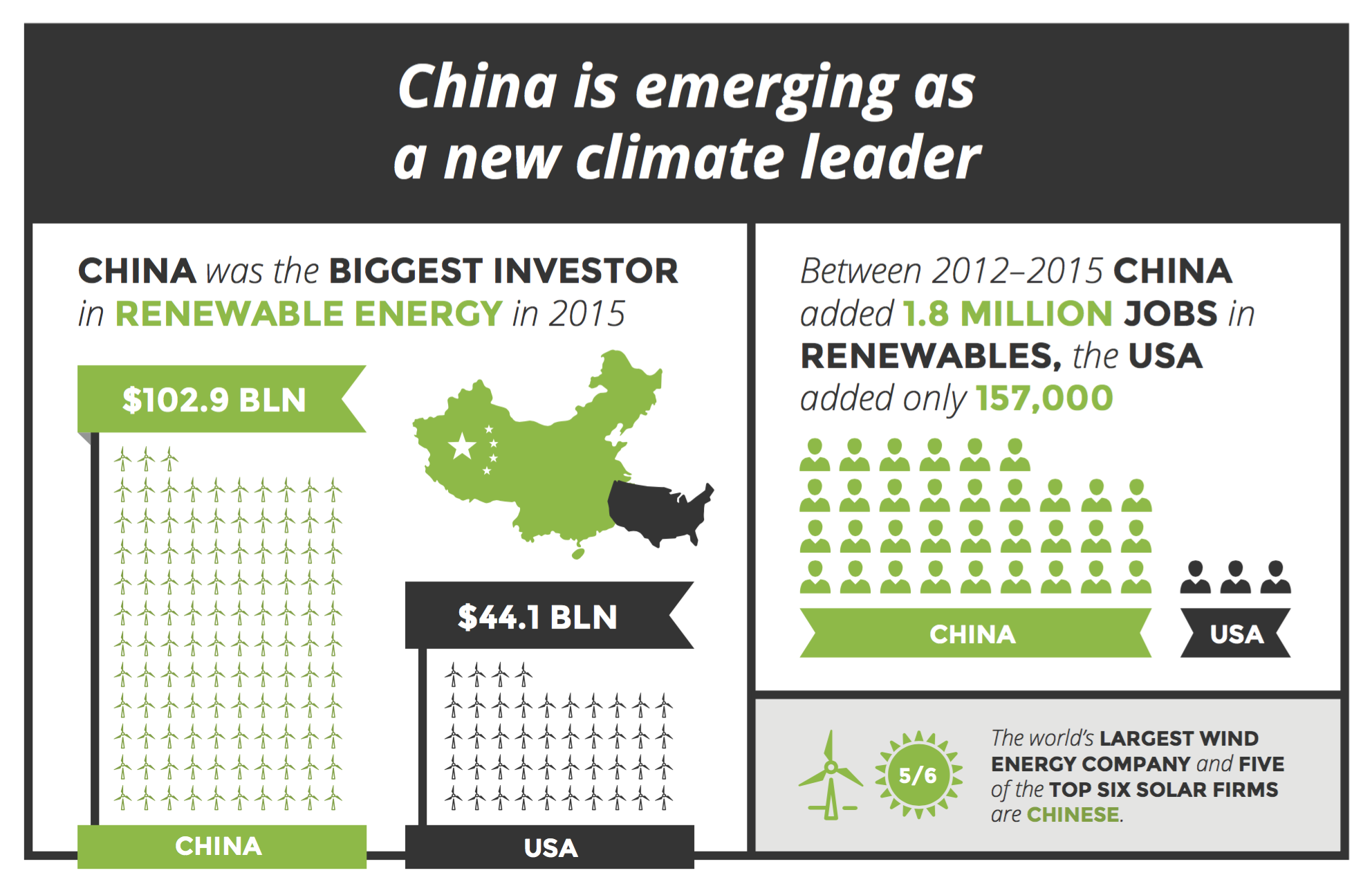 Transform to Net Zero: The Case for Circular Chemistry

Despite national climate pledges, we urgently need to limit the global temperature rise to 1.5°C. While a growing number of businesses have targets in place to reduce their energy dependence and switch to clean energy sources, there is a blind spot in the race to zero: embedded carbon.

The fashion industry is transforming from linear to more circular business models. How can we leverage this transformation to reimagine and rebuild the global fashion system so that it works for all? Through Keeping Workers in the Loop (KWIL), we convened over 45 major fashion industry players—established brands, emerging circular businesses, worker representatives, sustainable fashion experts, and international institutions—to explore this very question.