From May to September, the monsoon in Bangladesh brings tropical rains, muddy roads, and a kind of shocking humidity that makes your clothes stick to your skin. In addition to causing extreme temperatures, the monsoon’s heavy rains fill streets and seep into buildings, turning factories and residential areas into breeding grounds for mosquitos and water-borne diseases.

In Dhaka, one of the cities where BSR’s HERproject, a collaborative initiative that strives to empower low-income women working in global supply chains, operates, health research shows that diseases spike during extreme weather events. In garment factories, the humidity, combined with the heat and fabric dust emitted by the sewing machines, makes breathing difficult. These conditions exhaust workers’ energy and focus, affecting their efficiency and productivity, which in turn may also be affecting the performance of the readymade garment sector.

Rising temperatures and more frequent flooding events are likely to increase with climate change, and in Bangladesh, this will affect the lives of the 4 million people working in the garment industry. These employees are disproportionately women, which is one reason why empowering women to lead on building climate resilience is a key focus of our Business Action for Women efforts. 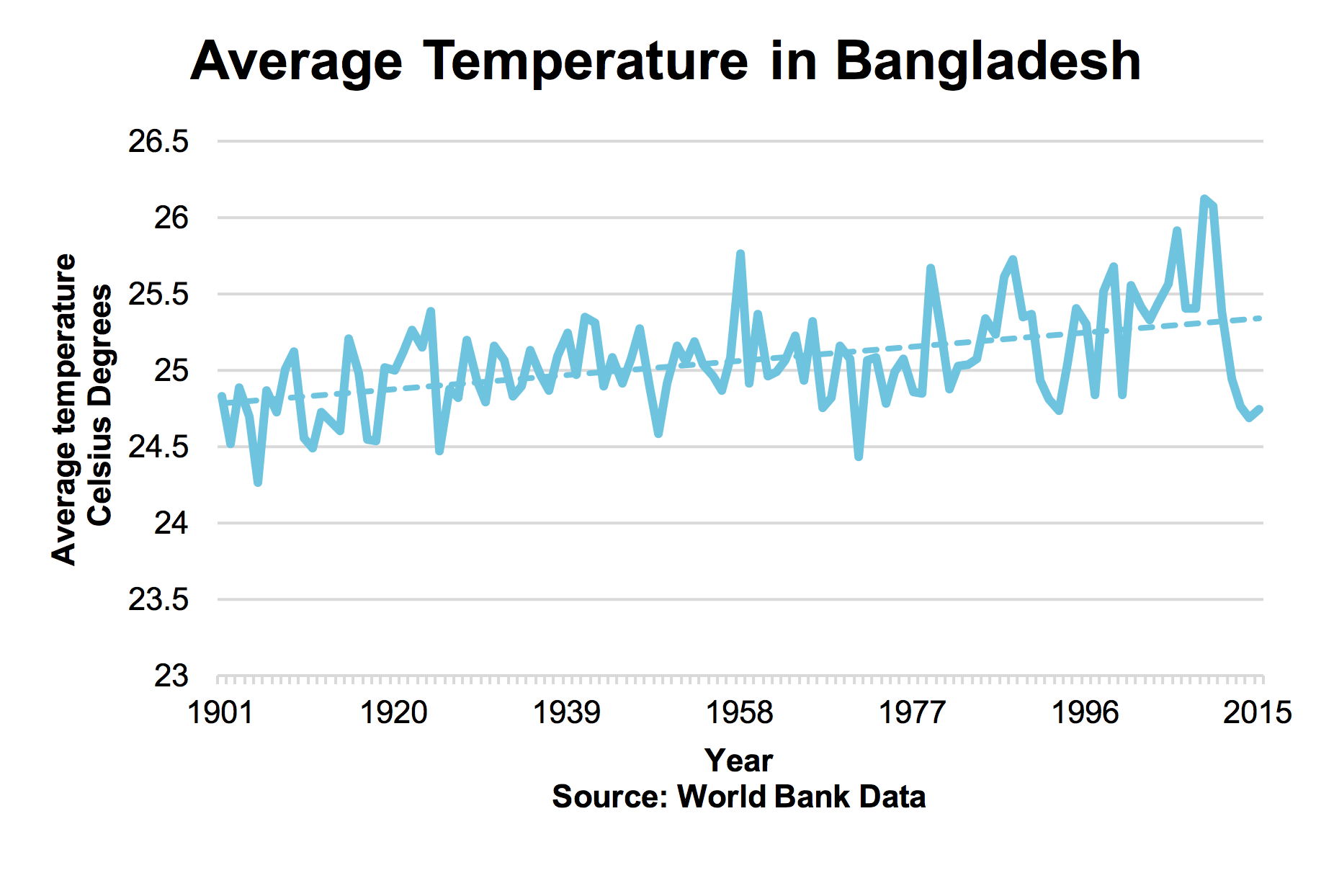 Over the past two years, through different collaborations, BSR’s HERhealth program has collected daily data on more than 15,000 garment workers from factories’ human resources and production teams in Dhaka. To explore how climate-related weather events are affecting garment workers and the industry as a whole, we examined factory-level data to answer two questions:

Link Between Rainfall and High Temperatures, and Absenteeism and Lower Productivity

By mapping data on workers’ sick leave and productivity rates against data on extreme weather conditions (measured by excessive precipitation and above-average temperature), we discovered a significant relationship between climate-related weather events and workers’ performance. The abundant rainfall in July—the peak of the monsoon season—correlated with an increase of monthly sick leave rate (calculated as number of workers absent due to health reasons of the total number of workers absent). An increase in 100 millimeters of average monthly rainfall precipitation—expected between the start of the monsoon season and its peak—is associated with an increase in sick leave rate by 10 percentage points per month. 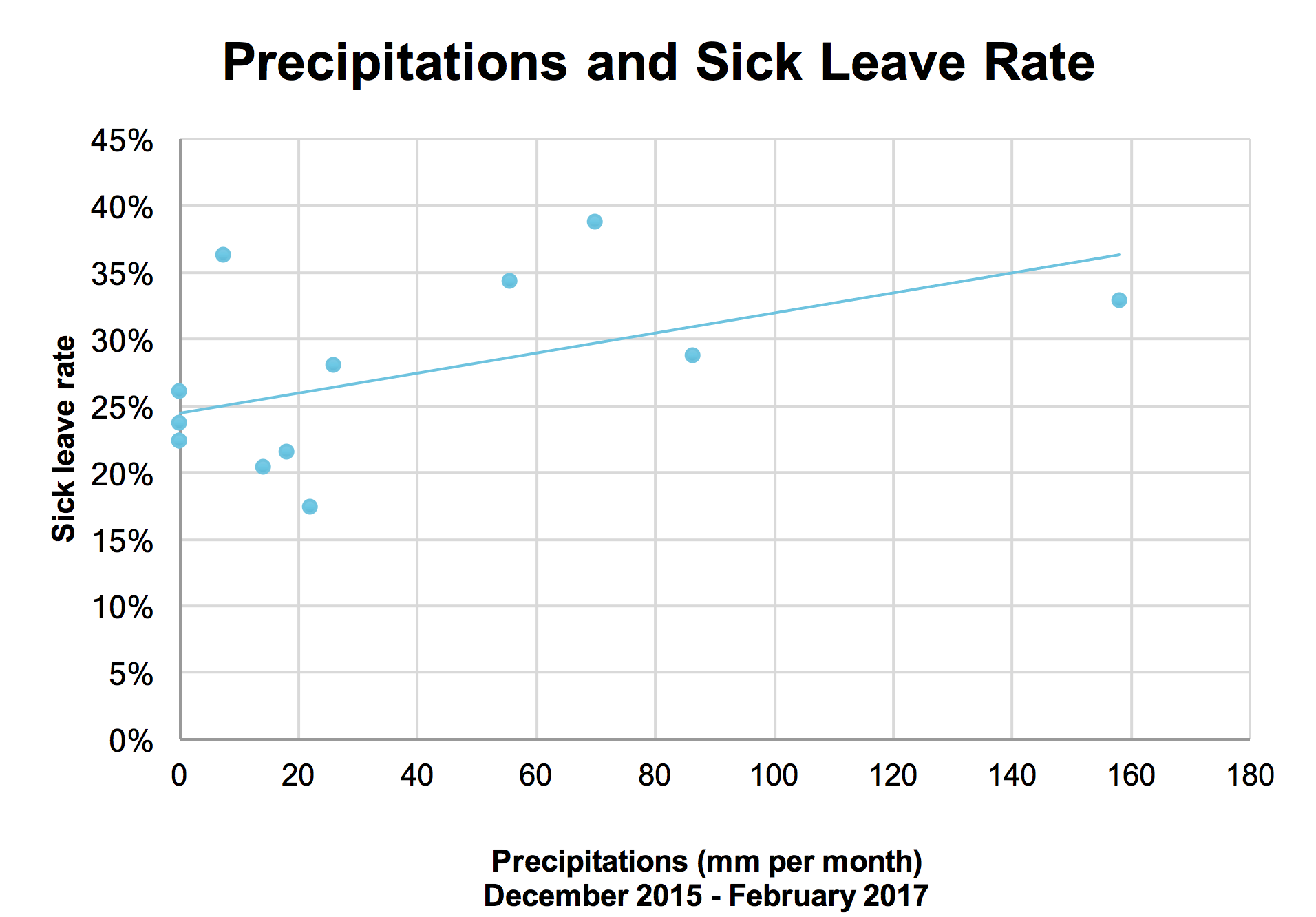 In addition, months with a 30°C average temperature correlated with a drop in productivity of more than two percentage points, compared to the winter months. While these are preliminary insights rather than conclusive evidence, these data present a worrying relationship between extreme climate events, worker well-being, and industry performance. 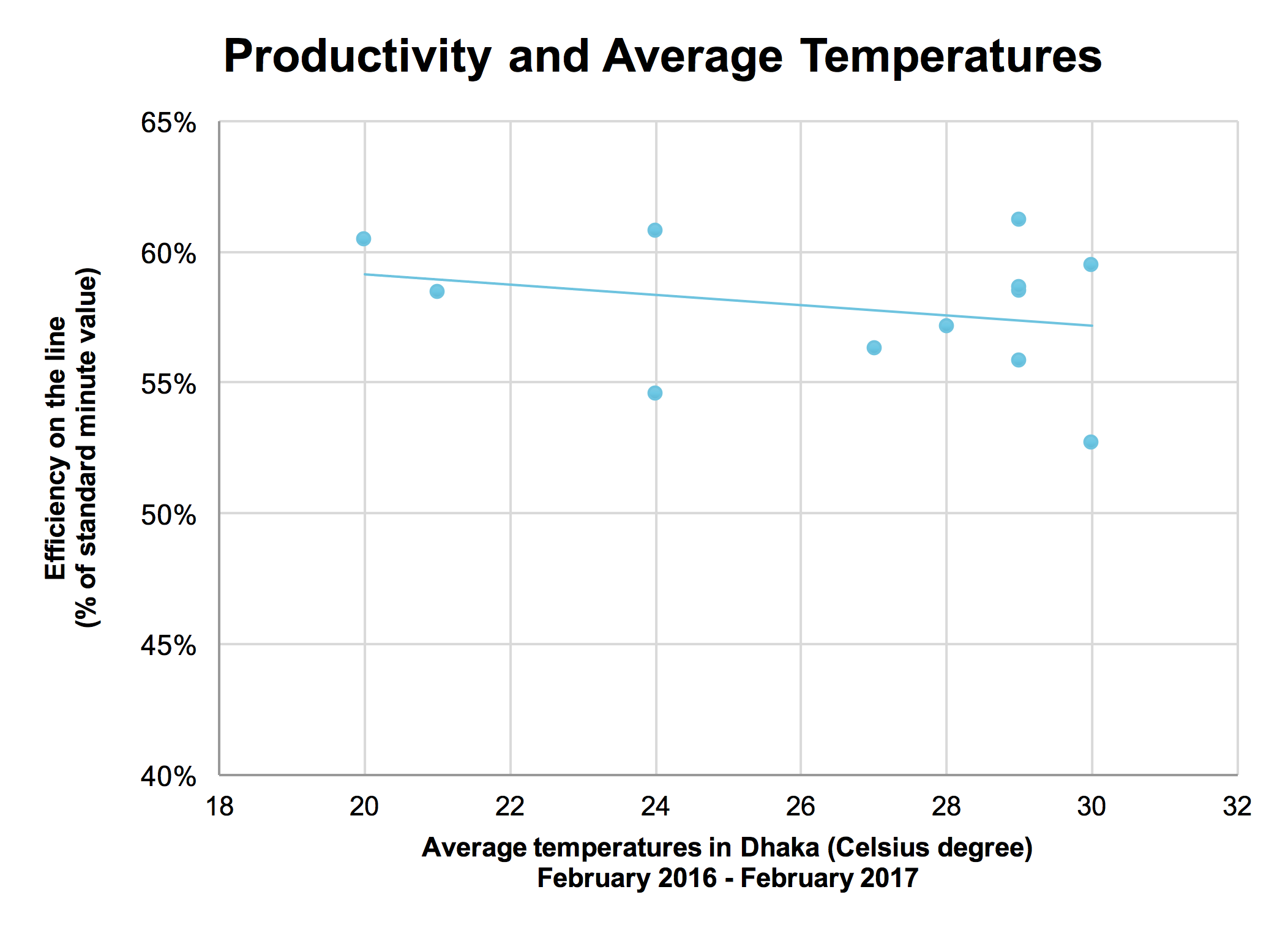 It’s not clear what about extreme weather events might be affecting workers the most, but public health experts found that, in Bangladesh, abundant rainfall combined with poor water- and sewage-management systems leads to the diffusion of waterborne diseases, especially those transmitted by mosquitoes and parasites. Recent experiments in the garment sector in Bangalore, India, demonstrated how heat can reduce worker productivity by a magnitude that is similar to what we found in our data.

If these links are confirmed, the projections of increasing extreme weather events due to climate change pose a significant future risk for the garment industry. The risks will be particularly acute for women, as the industry is the largest employer of female workers in the country. By holding back the industry, climate change could undermine the progressive women’s social and economic achievements that Bangladesh has experienced over the last 30 years.

The Role of Business: Data, Research, and Pilot Programs

To create effective strategies that build business and workers’ resilience to extreme weather events, we need a better understanding of the magnitude of the problem and the drivers behind it.

First, we need more data to confirm the impact of climate on workers’ productivity and health at the industry level. Companies can invest in more research to design and test strategies that build the resilience of workers and businesses to extreme weather events and climate change.

Please contact us if you’re interested in learning more about how we connect you and your suppliers with research experts and NGOs to investigate questions like these and translate the findings into sustainable, practical solutions.

HERessentials, a tablet-based learning app for workers and managers, started as a response to the COVID-19 crisis, but it has the potential to build digital capabilities for all workers. We share three key recommendations for businesses considering how to set up digital training in supply chains.

Key Ways for Business to Prepare for the Fall of Roe v. Wade

The sweep of the draft ruling on abortion leaked Monday night is staggering and destabilizing for business in America. Here are seven key points for business to consider.

Four Ways to Advance Mental Well-Being in the Workplace

What does an effective workforce mental health program look like? BSR’s Healthy Business Coalition, in partnership with One Mind at Work, identifies key aspects of such a program.

A human rights-based approach provides a strong foundation for addressing ethical issues. Based on our work with healthcare and tech companies and expertise in applying human rights frameworks to businesses’ ethical challenges, we share insights on best practices for managing emerging ethical issues in a corporate context.

Mental health issues that were exacerbated by the COVID-19 pandemic persist among American workers. Our members discussed how employers have effectively advanced mental well-being and resilience for their most at-risk employees.

Responsible business is deepening its commitment to empowering women across the value chain. One such example is Fyffes and HERproject expanding the new digital program HERessentials across several Latin American countries.

At the current pace, it will take another generation to achieve gender parity. As we mark International Women's Day 2022, we share three key areas that require urgent action from companies: addressing unpaid work and care, combating gender-based violence, and preparing for future jobs.