Looking Under the Hood: ORION Technology Adoption at UPS

This case study, published by BSR’s Center for Technology and Sustainability, examines UPS®’s deployment of ORION, a route-optimization software program for its drivers, and focuses primarily on the challenges related to technology adoption, from development to deployment.

Across industries, information and communications technology (ICT) has great potential to address some of the world’s most complex global environmental and social challenges. Even where good technology exists, however, there remains a key challenge related to adoption: selecting and installing a solution, integrating it within existing systems, and ensuring successful uptake by users to verify that the technology delivers on its promise.

To develop this case study, BSR conducted interviews with UPS staff along with background research on the objectives and attributes of the ORION system. We hope that this case study will help other companies successfully implement technology-based sustainability solutions through a change-management framework that takes into consideration design, process, and people.

Developed by UPS, ORION—or On-Road Integrated Optimization and Navigation—is a route-optimization system that analyzes a collection of data points including the day’s package deliveries, pickup times, and past route performance to create the most efficient daily route for drivers.

UPS created ORION as part of a broader effort to use data and predictive models to increase efficiency, thereby reducing both costs and environmental impacts. By charting more efficient routes, UPS was able to maximize the utilization of delivery vehicles and drivers, resulting in significant fuel savings—one of UPS’s largest costs.

ORION is expected to reduce operating costs by US$300 million to US$400 million a year once it is fully implemented in the U.S. in 2017. More than 70 percent of the company’s 55,000 U.S. routes are now using the software, with an average daily driving reduction of between six and eight miles. To put this into perspective, UPS can save US$50 million a year by reducing by one mile the average aggregated daily travel of its drivers.

To achieve maximum cost and emissions reductions, UPS had to ensure uptake at several different project stages, each with its own unique change-management challenges:

The successes UPS has seen as a result of implementing ORION support the many years of effort that have gone into its development. The company has already seen an average daily reduction of six to eight miles per route for drivers who are using ORION routes. This reduction has already made significant reductions in fuel use and vehicle emissions.

And when ORION is fully implemented throughout the U.S. in 2016, UPS expects to see annual reductions of 100 million miles driven and fuel savings of 10 million gallons per year. These add up to 100,000 metric tons of greenhouse gas emissions avoided every year.

The Evolution of Analytics at UPS

Descriptive analytics help you understand what is happening now and what has happened in the past. For UPS, this includes identifying and tracking packages using sophisticated labeling called Package Level Detail. This allows UPS and its customers to track packages as they flow through the delivery system. Descriptive analytics at UPS also include collecting detailed truck telematics data that is analyzed to further support timely preventive maintenance of its fleet.

Predictive analytics allow you to use past data to identify where you will be in the future. For example, using historical package data, UPS can predict future package volumes. This allows UPS to match capacity with demand and better automate the package-delivery process. These Package Flow Technologies save UPS more than 85 million miles driven per year.

New Technology Can Mean New Ways of Running the Business

In order to capture the full value of a new technology solution, one must think differently about the business. Because UPS had a long tradition of working in a particular way, it was challenging at first to implement a technology tool that would require a fundamentally different approach to drivers’ routes.

Indeed, when ORION was first being developed, R&D staff struggled to make it work. Developers tried to stick to the prescribed rules that the business had developed over time, but this resulted in an unworkable software algorithm that drivers couldn’t follow. When the developers took a broader perspective and re-examined driver best practices, they were able to develop a version that produced “drivable” results.

The benefits of technology-based sustainability solutions often seem straightforward—reducing miles traveled through more efficient route planning, for example. But realizing that potential requires that we re-think many other supporting systems and activities—for example, how drivers are trained and how they are measured and rewarded—in ways that can be counter-intuitive.

"With technologies that are transformational—like ORION—you have to be willing to let go of your exisiting business paradigms. You have to start with an open mind about how the technology can change the business." — Jack Levies, Senior Director of Process Management, UPS

Plan For and Invest in Implementation

With ORION, UPS found that testing and deployment represented more than 75 percent of the total cost of the project. Successful companies plan for this from the start, investing the funding, staff time, and expertise to scale. In addition, part of UPS’s vetting process for ORION was assessing whether they could easily train staff on the new system and see consistent improvements over time. For large technology systems, companies should include iteration and testing not only in product development, but also in implementation and rollout.

Even with Obviously “Sustainability-Driven” Technologies, Lead with the Business Case

With ORION, UPS’s business outcomes and sustainability outcomes were inextricably linked. Every mile driven correlated not only to reductions in miles driven, but also to reductions in greenhouse gas emissions. What ensured internal support, however, was the financial case, demonstrated through pilot testing. Sustainability advocates should always lead with a strong business rationale for any new technology, even for approaches that create obvious social and environmental impact. Without this, it will be difficult to attract the internal resources to scale.

The Technology Must Be Easy to Explain

Because ORION is based on a new kind of predictive model, it may recommend route scenarios that—while more efficient—are highly counter-intuitive for a driver. Especially at the beginning of ORION’s deployment, the UPS team paid special attention to having every aspect of the system be easily understandable by drivers. This ensured that the operations teams understood how the system worked and why it did what it did, which enabled them to see when and how it provided more efficient solutions. As drivers have become more familiar with ORION and have learned to trust its recommendations, the team has been integrating even more sophisticated and efficient optimizations that are even less intuitive.

UPS also needed to develop short-term metrics to determine whether an ORION deployment had been successful at a particular site. Actual performance is difficult to measure over the course of just a few weeks, so UPS developed leading indicators—like the percentage of time a driver follows an ORION route—to enable success measurement during deployment. Through iteration, UPS selected short-term metrics tied to longer-term indicators of success, such as cost reductions and performance over time.

To demonstrate the technology’s potential, R&D staff took decision makers on what they called an ORION ride. Using a rental car, they took a test drive of the UPS route, guided by prototype ORION software. This demonstrated the potential of the ORION technology by allowing operations teams and drivers to witness how it worked and how it could improve on existing approaches. In particular, these rides helped UPS employees see how software algorithms, even if occasionally counterintuitive—like passing a house on an initial visit to the neighborhood only to revisit it to deliver a package later—could result in better efficiency overall.

With software systems, the output is only as good as the data input. UPS found that available maps weren’t accurate enough to serve as a basis for ORION. As a result, part of any ORION deployment involves validating maps and other supporting data. UPS also conducts ongoing monitoring of data quality and has processes for addressing data inaccuracies. Any company transitioning to predictive algorithms should expect to invest significantly in the underlying data.

Deploy Slowly at the Start to Achieve Greater Scale

UPS started its deployment slowly at the beginning to ensure that the concepts were being trained effectively and that the deployment approach was successful. The company found several early ways to improve—for example, in how they measured the short-term success of the deployment and linked this to longer-term success—which they were able to incorporate. This ensured success at a critical time, when skepticism of the new approach was highest and before results had been demonstrated on a large scale.

To be successful, technology tools need to fit inside the processes that people already follow. This requires on-the-ground work, interviews with users, and lots of testing. Indeed, site managers and delivery drivers were integral parts of the ORION development team from the start, since they were able to provide feedback on what actually works in practice.

To achieve the business and societal transformations needed for long-term sustainability, new technologies and approaches must be integrated into how we do business. To help companies successfully implement technology-based sustainability solutions, the Center for Technology and Sustainability poses the following questions to help business leaders navigate successful implementation of technology solutions. 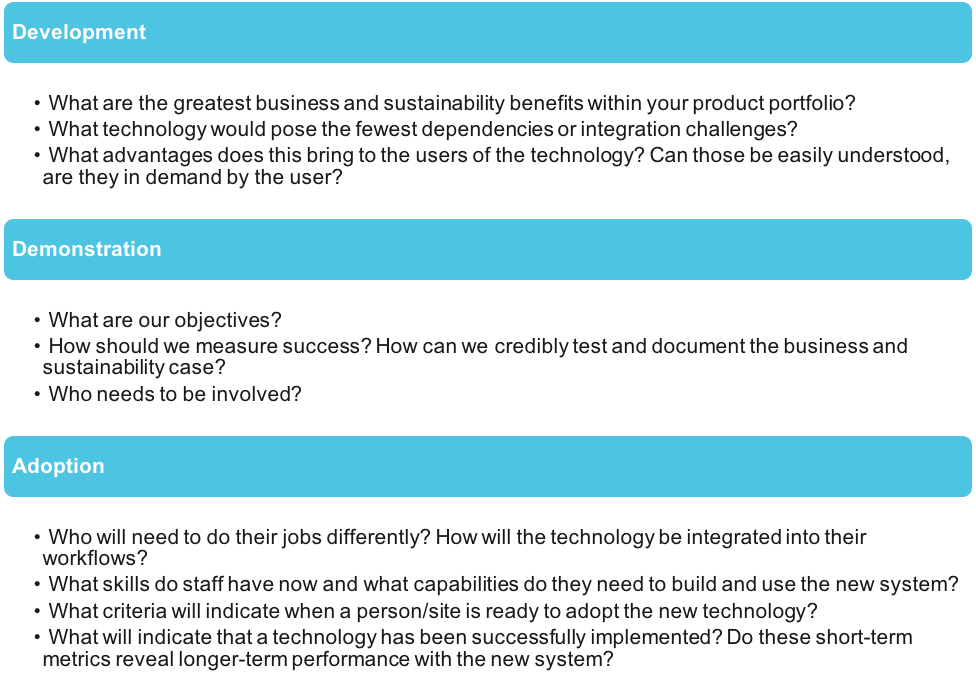 #Center for Technology and Sustainability, #Information and Communications Technology

According to UPS, the percentage of the total cost of a project that goes to the implementation and rollout of new technology solutions.

Harnessing the Power of Data to Combat Human Trafficking

Last week, Tech Against Trafficking (TAT) brought together technologists, nonprofits, academics, governments, and policy-makers from 60 countries in a virtual event to celebrate the close of its second Accelerator and discuss how tech advancements can be used to combat human trafficking.

SaaS services address numerous business needs, and they are behind many of the consumer-facing products and platforms we use every day. This report identifies salient human rights risks and makes recommendations to SaaS providers on how to avoid, prevent, and mitigate adverse human rights impacts associated with their individual services and the sector as a whole.

Meta commissioned BSR to undertake a human rights assessment of extending end-to-end encryption across Meta’s messaging services. We share some of the assessment’s key points.

Applying the UNGPs to Technology: Our Point of View

The UN Human Rights Council initiated an expert consultation on the practical application of the Guiding Principles on Business and Human Rights (UNGPs). BSR has published a submission drawing upon our experience of 100 human rights assessments with tech companies.

The Global Internet Forum to Counter Terrorism (GIFCT) commissioned BSR to conduct a human rights assessment of its strategy, governance, and activities.