The Business Case for Building Climate Resilience into Your Supply Chain

Photo by Pop & Zebra on Unsplash

With the Global Climate Action Summit coming up next month in San Francisco, Climate Week taking place shortly thereafter in New York, and the UNFCCC climate negotiations happening in Poland in December, climate change is top of mind for many sustainability professionals as we head into the fall.

Here at BSR, we’ve been doing a lot of work on climate resilience, in particular what it means for business and how it relates to global supply chains.

The Intergovernmental Panel on Climate Change (IPCC) defines resilience as “the ability of a system and its component parts to anticipate, absorb, accommodate, or recover from the effects of a hazardous event in a timely and efficient manner, including through ensuring the preservation, restoration, or improvement of its essential basic structures and functions.”

As we assert in our recent report, a resilient business will therefore be able to anticipate, absorb, accommodate, and rapidly recover from climate events in its own operations and throughout its value chain. It will further contribute to resilient societies, which means moderating harm to socio-ecological systems and enabling people, economies, and natural systems to rebound quickly in the face of adversity.

To date, many businesses have focused on mitigation efforts—those focused on reducing greenhouse gas emissions—which are vital to any company’s climate strategy and critical to global efforts to avoid unmanageable climate impacts. These include steps like sourcing renewable energy, investing in more energy-efficient infrastructure, and choosing more sustainable fuels for operations and logistics.

As the impacts of climate change are increasingly felt around the world, however, it has become clear that simultaneous efforts are necessary to increase adaptive capacity and build resilience. 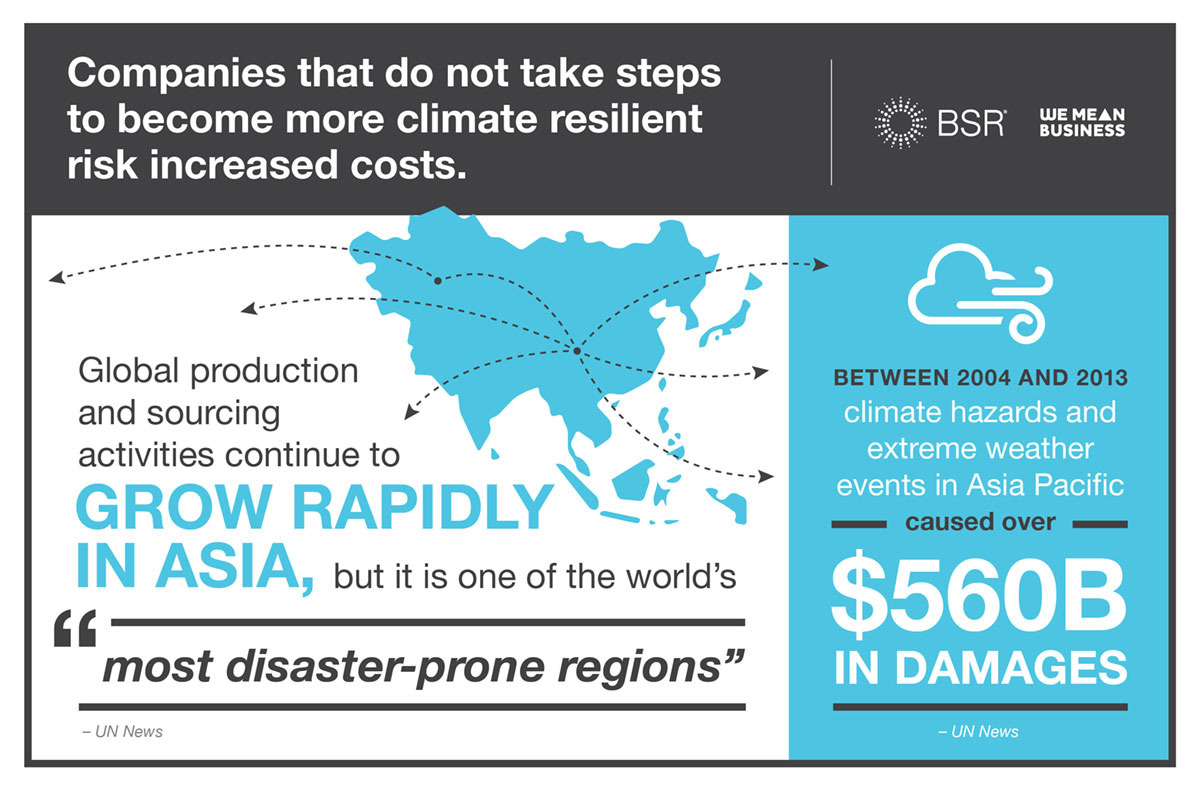 Global production and sourcing activities continue to grow rapidly in Asia, but it is one of the world's most disaster-prone regions.
Source: UN News

Between 2004 and 2013, climate hazards and extreme weather events in Asia Pacific caused over US$560 billion in damages.
Source: UN News

This is true both within companies’ direct operations and in their supply chains. In fact, 76 percent of suppliers reported climate risks with the potential to generate a substantive change in their business to CDP.

76 percent of suppliers reported climate risks with the potential to generate a substantive change in their business to CDP.

During Thailand’s severe flooding in 2011, more than 14,500 companies reliant on Thai suppliers suffered business disruptions worldwide. Total insured losses were estimated between US$15 billion and US$20 billion.

Electronics manufacturers and auto companies were particularly impacted. Western Digital, with one third of the global hard drive market, lost 45 percent of its shipments. HP lost US$2 billion, while NEC cut 10,000 jobs due to a global shortage of hard disk drives. Toyota, Honda, and Nissan lost 240,000, 150,000, and 33,000 cars respectively. Some companies had to postponenew car models. 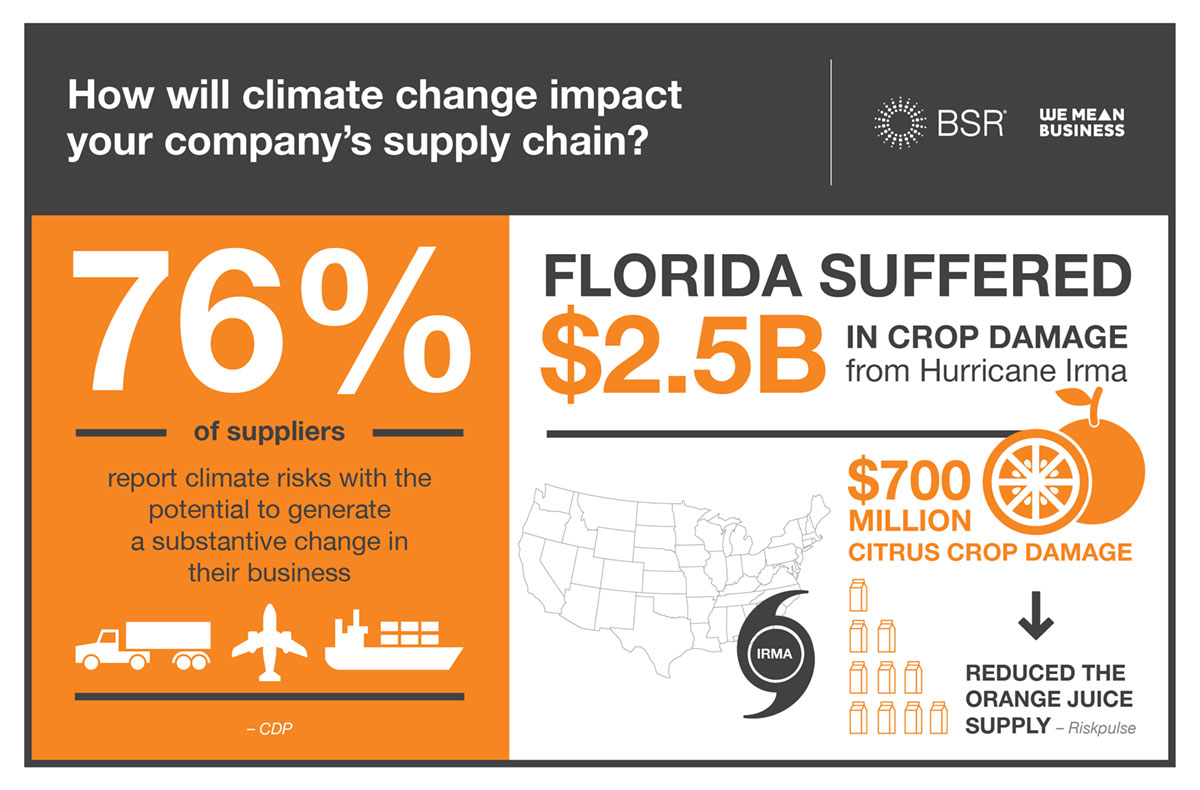 Businesses can empower their customers by building climate-resilient supply chains.

The global IT industry supplies many other industries and is disproportionately exposed to climate risk. The industry's resilience-building efforts help corporate customers across industries.
Soruce: Yale Environment 360

Most of the world's largest data centers are in hot or temperate climates, where vast amounts of energy are used to prevent overheating.
Source: Yale Environment 360

Businesses that switch to Google's G Suite products like Gmail report up to 85% reduction in IT energy use and carbon emissions.
Source: Google environment

While building resilience is something that will require many stakeholders across society to work together, many companies are actively considering how our already-changing climate is likely to impact their operations, products, and supply chains both now and in the future. One example of what this can look like is The Coca-Cola Company's recent work with us to build a climate resilience framework for its value chain.

Another example is the over US$100 million Starbucks has invested to help make the coffee communities in its supply chain more climate resilient. 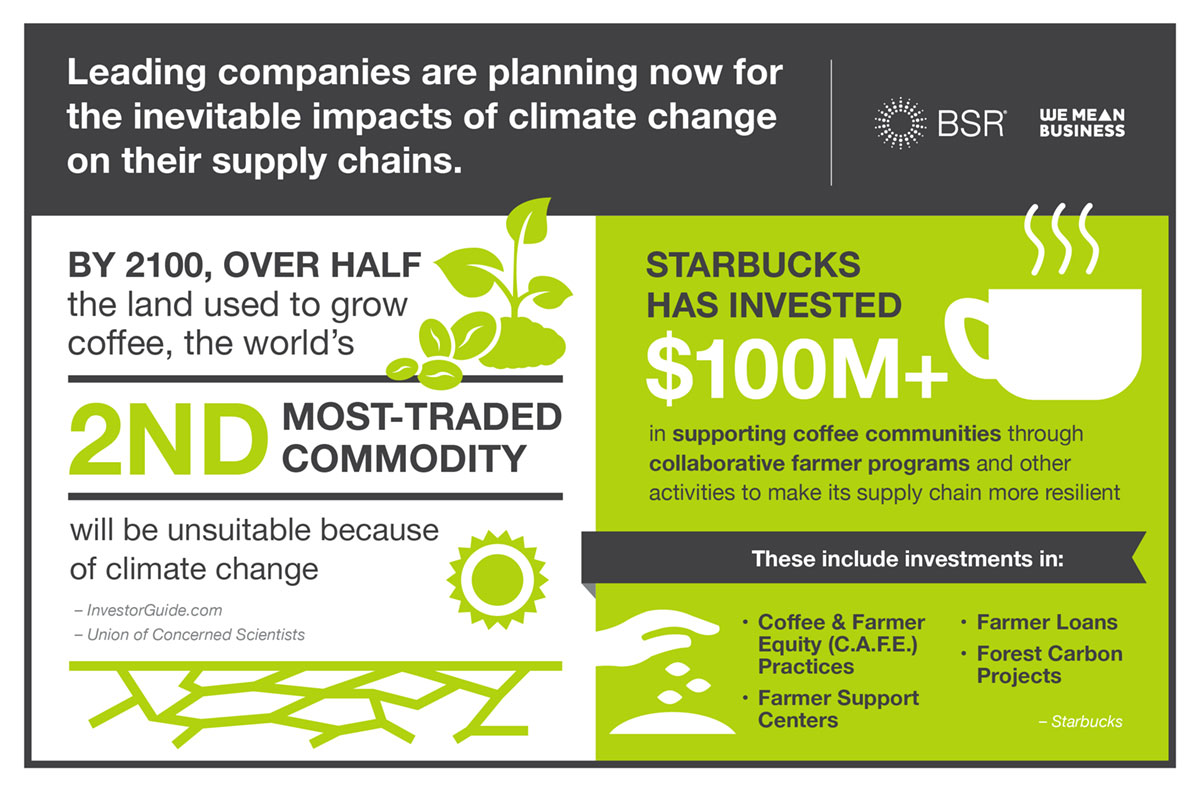 How will climate change impact your company's supply chain?

Seventy-six percent of suppliers report climate risks with the potential to generate a substantive change in their business.
Source: Carbon Disclosure Project

The State of Florida suffered US$2.5 billion in crop damage from Hurrican Irma and US$700 million citrus crop damage, which reduced the orange juice supply.
Source: Riskpulse

Efforts like these help companies prepare for the effects of global temperature increases while simultaneously enhancing their relationships with their key partners and stakeholders and increasing the overall resilience of their business strategies.

In advance of the Global Climate Action Summit, we are encouraging companies to make large-scale supply chain climate resilience commitments that will enable their suppliers to implement resilience strategies—protecting workers, communities, and the natural environment from climate change impacts. If you’d like to learn more about what these could look like, please contact us to learn more.

We will also be co-hosting an event around the Summit on September 11 about Building Resilience Today for a Sustainable Tomorrow, and we would love to see you there.

The world is fragmenting politically, economically, environmentally, and culturally. BSR President and CEO Aron Cramer shares ﻿the six interlocking factors that are accelerating fragmentation and why they're significant for business.

In response to the US Supreme Court ruling West Virginia v. EPA, BSR’s President and CEO Aron Cramer issues a statement on the dangers of the decision, its implications for the future, and why ambitious climate action is urgently needed.