A woman working in a small shop in Ghana. Photo by Arne Hoel/World Bank Group, via Flickr, CC BY-NC-ND 2.0.

As part of BSR’s Business Leadership for an Inclusive Economy initiative, we are running an interview series with thought leaders from business, government, civil society, academia, and philanthropy. Their voices and perspectives will help deepen our conversation on how we can collectively build a more inclusive economy, as well as how business can most effectively contribute to that vision. This week, we are sharing the conversation we had with Nigel Twose, the senior director responsible for The World Bank Group’s work to create more, better, and inclusive jobs in developing countries.

Jessica Davis Pluess: What is an inclusive economy?

Nigel Twose: An inclusive economy is one where wealth and value-added benefits reach everyone, including the most vulnerable members of society, 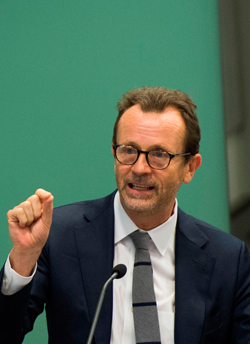 and inequality declines over time. Our World Bank goals—ending extreme poverty by 2030 and boosting shared prosperity among the bottom 40 percent—are vital to this notion of an inclusive economy.

Davis Pluess: What makes working toward an inclusive economy so important now?

Twose: People work their way out of poverty through jobs, but today’s global jobs crisis is blocking that path, threatening to increase wealth disparities, prevent millions in developing countries from moving out of poverty, and cause those on the margins to fall back into poverty.

The global economy is recovering from the recent recession, but growth is uneven and brittle. There’s a real risk that the world will get stuck with this mediocre level of growth, or with a growth that leaves out sections of society, resulting in high unemployment and rising inequality.

Davis Pluess: What is your strategy for job creation at the World Bank?

Twose: We are striving for “more, better, and inclusive jobs,” as we outline in the Jobs Group vision. The world needs more jobs for the one billion people of working age that are not working. It needs better jobs to address challenges posed by  informality, such as  extending social protection to the millions who make a living this way. And we need inclusive jobs for women, youth, people with disabilities, and other populations that are not well represented in the labor force.

Since there isn’t a one-size-fits-all answer, there was a need for better diagnostics to determine the primary constraints and opportunities for job creation, both country by country and sector by sector. We are working with governments and the private sector to design context-specific job creation and workforce development strategies.

Davis Pluess: How do technology changes, which are likely to affect the future of work, inform your jobs strategy?

Twose: To date, there has been little analysis about the impact of technology on jobs in developing countries. We know however, that as technology becomes smarter, it is likely that entire jobs or a subset of the skills embedded in a job might be digitized. For example, advances in office technology since the 1980s have meant that few businesses hire typists anymore. The responsibilities of clerical staff have had to shift, often along with their wages.

Technology will also affect jobs in  light-manufacturing—jobs that poor countries have depended on as the first rung on the ladder for evolving their economies toward industrialization and, ultimately, toward a service economy.  Think, for example, of the hundreds of thousands of young women in Bangladesh who get their first jobs working in apparel factories. As the price of technology declines, you presumably reach a point where wages are rising and jobs disappear. It’s unclear when and how this will happen, and governments and firms don’t know how to plan for this.

However, that is not to suggest that technology is bad or to be feared. Technology is also creating opportunities by connecting buyers and sellers in revolutionary ways. Because of eBay, hundreds of thousands of companies of less than five people have become multi-nationals, exporting to upward of 30 countries.

My point is we need a better understanding of technology—the pace of change, the reality of the concerns and fears, and the rise of new opportunities. Some questions to consider include: What are the new jobs and forms of work that might not exist today but are going to be big opportunities in the coming years? What does this mean for an Ivory Coast, or a Rwanda—both of which are taking technology seriously and making investments in the internet and associated platforms?  How might we work together with the private sector and with governments, to equip their citizens with the skills to take advantage of coming opportunities?

Instead of fighting against technologies that improve productivity and efficiency, it’s about being able to predict where the new opportunities are going to be. Resisting technology is a fool’s errand.

I can’t emphasize enough how critical this topic is for economic development.  This is why our 2016 World Development Report will focus on technology.

Davis Pluess: On that point, what is the World Bank learning about some of the challenges and opportunities around creating better quality jobs?

Twose: We have two key initiatives that have provided us with a lot of insights on the challenges and opportunities. The first, Better Work, which is a partnership of the International Labour Organization (ILO) and International Finance Corporation (IFC), is focused on workplace standards in the global apparel industry. Through this initiative, we have emerging, conclusive evidence that improved labor standards are also—in a very compelling way—good for productivity and profitability. The whole argument that improved labor standards are just a tax on profitability falls away.

The second initiative is about the workplace of the future. Pensions and broader social welfare schemes have largely been designed around the premise that workers are linked to one employer for a protracted period of time. This premise does not hold true in today’s world, so we have to rethink those systems.

Davis Pluess: What is the most important contribution that business can make to address this job crisis, and more broadly, to build an inclusive economy?

Twose: The private sector provides 90 percent of all jobs. Any conversation about job creation or an inclusive economy that does not involve the private sector will fail. The private sector needs to be engaged in a systematic way in order to determine what’s needed and to then think together with the public sector about what skills are going to make our workforce competitive.

Davis Pluess: Are there specific examples of successful collaboration in this vein?

Twose: There’s an interesting coalition called “Solutions for Youth Employment,” in which the World Bank and a number of global companies, including Accenture, are heavily involved.

We also have an important initiative called, “Let’s Work,” partnering with other international financial institutions and the private sector, to deepen our understanding of the demand side of employment and how to make it more inclusive. International organizations are working together on this agenda in a way we haven’t before—with business, governments, and civil society, including trade unions, which are vital to this agenda.

Also, the G20 now has a permanent “formal employment working group,” which it never had before.  Every year the G20 will have a jobs agenda, focused on inclusive growth.

This type of collaboration among coalitions and across sectors at the international level is cause for optimism. At the same time, I don’t think we’re at the stage of saying, “Here are the three best examples. Go do it everybody.” We have more work to do before we get there.