Women make up a majority of China’s manufacturing sector, and businesses that invest in women’s skills, capacity, and empowerment will be better equipped to succeed.


The Women in Factories China program seeks to empower women and the factories where they work as agents of sustainable change.


According to initial assessments:

The Women in Factories China program is funded through a three-year grant and partnership with the Walmart Women’s Economic Empowerment Initiative. 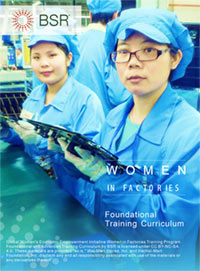 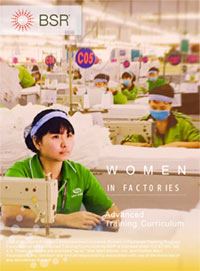 Please fill out the form below and we'll email you the link to download the Fuel Tool. Fields marked with an (*) are required.

In Her Own Words

BSR believes women’s empowerment is critical to building an inclusive economy and sustainable future. We have been supporting women working in global supply chains for more than a decade, through individual company programs and our global partnership initiative, HERproject. These women face many vulnerabilities, including low wages and poor working conditions, limited access to critical products and services like health and financial services, and limited community-based resources, including basic infrastructure related to water and energy. At the same time, these women hold great potential as independent income earners, building marketable skills, and consuming in local economies.

One program BSR supports is Walmart’s Women in Factories program in China, which provides foundational and advanced training to women workers to build their skills in areas such as communications, management, life skills, health and nutrition, and financial literacy. Here we share six women’s perspectives on their participation in the program.

I manage a quality control team that tests batteries. The factory produces many types of electronics that have different recharge times—some are two hours and some are three hours. Before, it took two to three people to charge and test all the electronics, and there was downtime waiting for the electronics to charge. After the training on lean production, I thought about how to improve the efficiency of the workspace. Now I have rearranged the workflow so that as one worker is charging one electronic device, the worker can also test other electronics. I have reduced the number of workers on the line from three to one. The other two workers can now do more productive tasks. It’s really hard to hire and retain workers, so as a manager I need to think about how to put workers where they can make the most impact.

I work in the inventory department of Hairishen. Through the training, I have learned how to eat more nutritiously and exercise more often. I have also learned that I should praise my child and be his friend.

My husband and I both work in Shenzhen, but my family is in Hunan. When my son was only 1 year old, I left him in Hunan in the care of other family members. I only go home once a year, so I try to call him often, but he doesn’t want to talk to me. In his heart, he didn’t have a place for me, his mother.

During the Parent-Child Communication training, I learned that I have to talk to my son about topics he’s interested in. So now when I call him, instead of asking him, “What did you learn in school?” I now ask “Did you have fun today?” and “Who did you play with?” Last time I talked with my son, he asked me to bring home a badminton racket for him to play with. He’s actually looking forward to me coming home!

I work in the hardware department at Hairishen. Before the training, I would eat whatever and whenever I wanted. I often skipped breakfast, so I could sleep in. After the Nutrition and Exercise training, I eat breakfast and my memory and productivity has improved. In my job, I have to go to the inventory department often, but I would often forget to bring something with me, necessitating multiple trips. Eating breakfast has really helped my memory, so now I just make one trip to the inventory department. I also learned what nutritional content is in which foods, which helps me think. Before, I had a hard time communicating with my supervisor. My supervisor said it took a long time for me to get to the point. Now that I eat more nutritiously, I also think more clearly and can better form my thoughts before speaking.

I have worked as a line manager in the dispatching department for the last three years. In the past, I spent what money I had on whatever I wanted. Then I learned how to record my daily expenses, where I should be spending money, where I shouldn’t be spending money, how to save money. It has helped me greatly. With the money I’m saving, I plan to use it on my child’s education or buy an apartment.

I am a line worker in the packaging department. As part of my job, I need to do quality control checks. Before the training, I was afraid to talk to the worker responsible when I saw a quality problem. I used to ask my supervisor to talk to the worker so that I didn’t have to do it. Now I have the confidence to speak to the worker directly. I also don’t get upset anymore when my supervisor gives me feedback. The Communication module has really improved my skills and relationships with coworkers.